These months are just absolutely FLYING by! 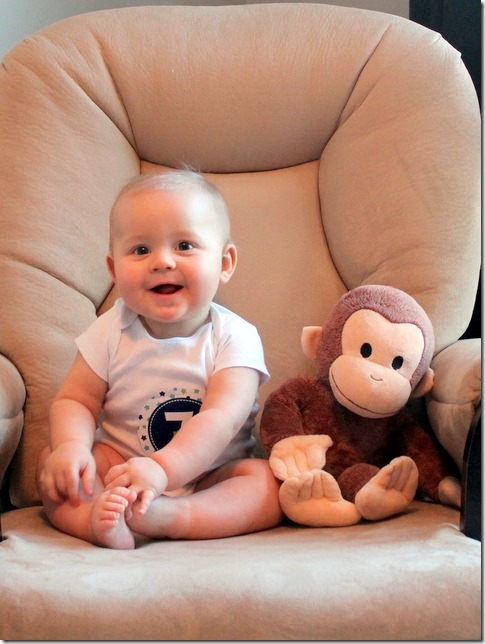 This past month has been a fun one, and it’s also had some challenges thanks to some sickness (AGAIN). But as I continue to say, each month just keeps getting better and better!

JUST FOR FUN: HERE’S A LOOK AT LUCAS AT 7 MONTHS!

When we went for Alex’s 6 month appointment (a little over a week after he turned 6 months) he was 19.2lbs (75th percentile) and 29 inches (95th percentile) so I’d guess that he’s probably getting close to the 20lb mark soon. I mean, those thighs… 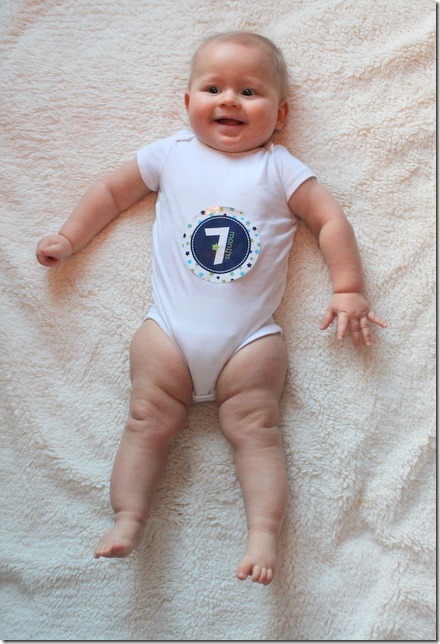 Alex loves food…there’s no denying that. We’re still continuing with the solids, 3 meals a day, and things are going really well. On top of his solids, he also still nurses every 3-4 hours during the day (or gets bottles on the days he’s at daycare) and also gets one bottle of formula at bedtime. I actually feel like my supply may be dwindling a little faster right now, since I haven’t been able to pump as much as I was during the day. It’s a little bit of a bummer, but I’ll just keep on rockin’ on and see where things go. If he needs more formula, I’m cool with it.

As for solids, I finally had the chance to make some baby food! And we also tried a few new foods, too. With Lucas, I was VERY particular about which foods he tried when, how long I waited in between introducing new ones…but with Alex, I’m definitely much more lax about it #secondkidprobs. I’ve purchased a few of the BeechNut Naturals food jars and Alex really seems to love them, so I like having those on hand too.

Along with those, we’ve also tried the following:

Alex hasn’t changed too much in the nap department since last month. His first nap is typically 1-1/2 to 2 hours after waking in the morning and can last anywhere from 1 to 2-1/2 hours long. His second nap will typically happen about 2 hours after waking from his first and is usually around 60 – 90 minutes long. He’s in the crib with a blanket and may or may not be able to put himself to sleep; we were doing pretty well, then he got sick, so he regressed a little and we did more rocking to sleep. Poor baby, though…I wasn’t minding the extra snuggles.

He still typically takes a third cat nap while I nurse him after work/daycare, which can be anywhere between 4:30-5pm and will usually last for about 10-30 minutes. I just try to make sure he doesn’t sleep past 5:30 so it doesn’t interfere with bedtime. Again…definitely not minding those extra snuggles, since I apparently don’t make babies who like to snuggle very much. 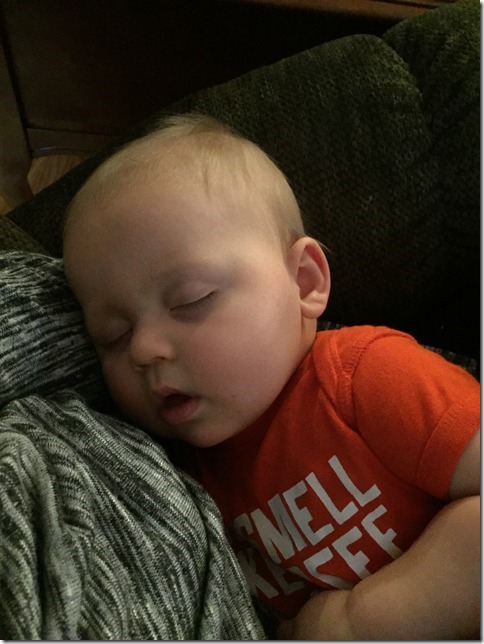 Things are still going fairly well in this department! We had a few tough nights while Alex was sick (poor guy had a nasty cough, phlegm, wheezing, hoarseness…) and that had us backtracking a bit to rocking him to sleep. We actually attempted the Rock ‘n’ Play again one night to try and keep him a little more upright, but after he almost rolled himself right out of it, that was a definite no-go and went right back in storage.

He still sleeps in the Baby Merlin Magic Sleepsuit for nighttime sleep, and I’ve just recently decided I need to buy a larger size. I thought about holding off, but he sleeps so well with it, I figure…why stop a good thing? We put him down awake and most nights, he falls asleep on his own with no crying.

Alex is usually in his crib anywhere between 7 – 7:15pm; some nights, he’ll sleep until 7am. Other nights, he’ll wake up once (which can be anywhere between 10pm and 4am…that’s not quite as predictable). On the nights he does wake, I can typically nurse him super quick on that wakeup and have him back in his crib within about 15-20 minutes. Some nights he falls asleep while nursing, and other nights he’s still awake when I put him back down, but he winds up falling off to sleep on his own (which is amazing). 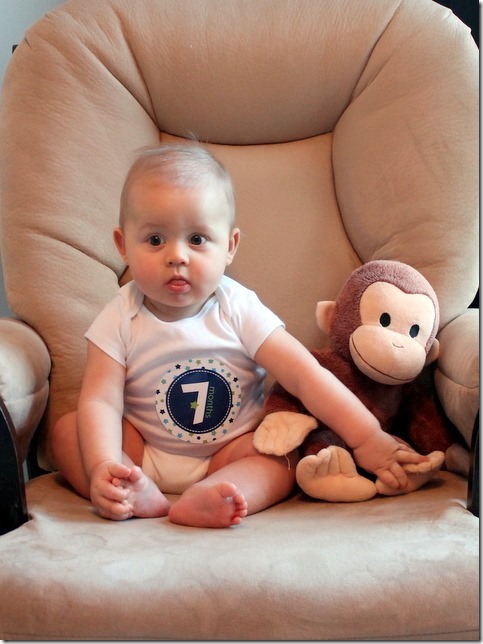 Most of the 6 month clothes are starting to get put away at this point; he can still squeeze into some of them, but most are either just a little bit snug and/or short. The  9 month clothes fit him much better. He’s also in size 3 diapers, and I recently bought overnight diapers too, since he was waking up wet almost EVERY morning. They seem to have helped a bit though so it was worth the purchase (aka, not having to do extra laundry every single day). 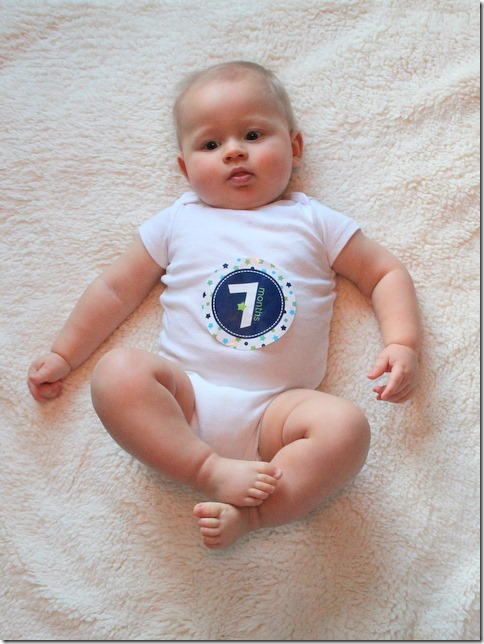 Alex is SUCH a curious little guy. Nursing him anywhere but a quiet, dark room has started to become a challenge since all he wants to do is look around and see what’s going on. This is especially true if he sees his big brother or Cody…he gets so excited for both of them! 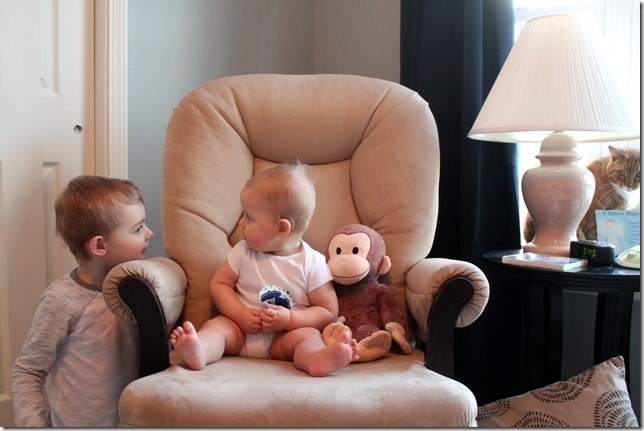 Alex has a very strong personality, just like his brother. When he’s happy, he is full of smiles, squeals, giggles, and more. When he’s angry? He has a scream like no other and he lets you know it. But for the most part, the only time those screams happen are when he’s tired or hungry (as opposed to about 4 months ago when they happened all. day. long.).

I love watching his curiosity as he takes in all of his surroundings, and I have no doubt these next few months are going to be full of fun. 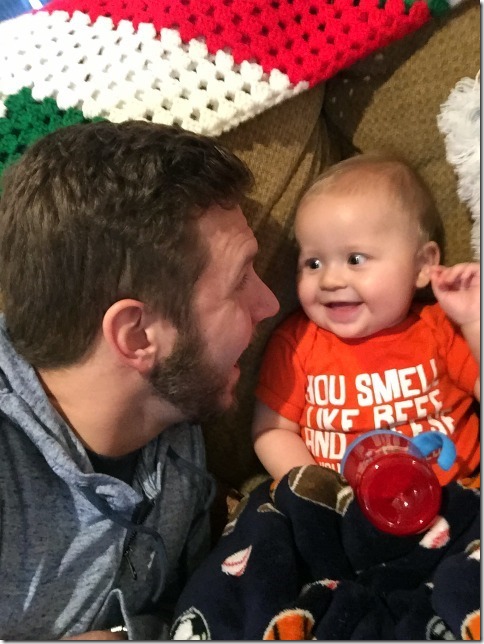 Sitting up like a champ, and also starting to pull himself around in circles when doing tummy time. He isn’t quite moving forward or back…just spinning for now. 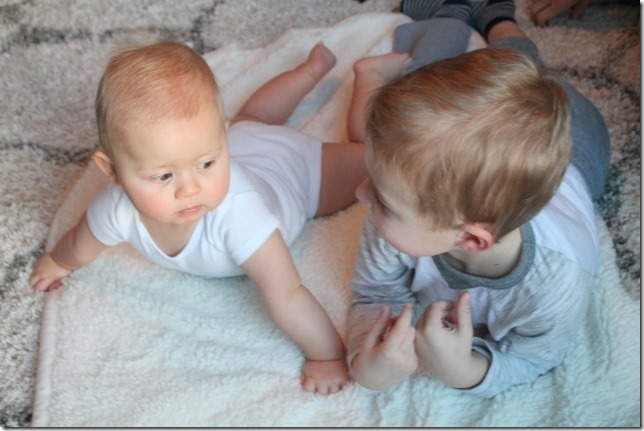 He’s also really into grabbing faces and mimicking certain facial expressions like smiles, and sticking out your tongue. And as of recently, he’s starting to show attempts to try and pull himself up onto things while sitting (like chair legs, his jumper, etc.). He isn’t getting anywhere yet, but little man is trying!

His number ones are definitely Cody and his big brother. Seeing the excitement on his face when he sees or even hears Lucas just makes my heart melt. 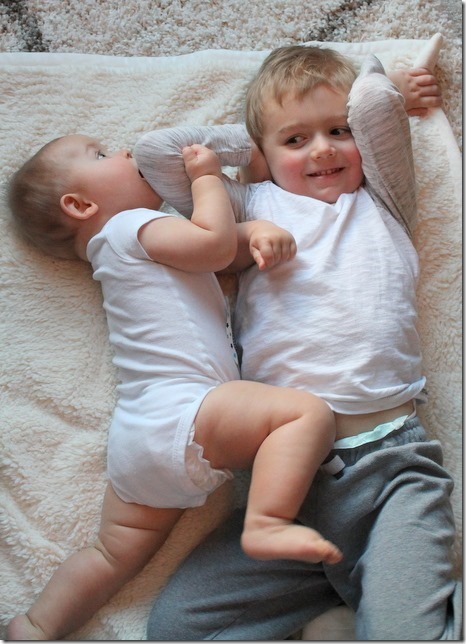 And I think this picture perfectly portrays their current brotherly relationship; Lucas is always looking out for his little brother, but he’s not much of a fan of him grabbing him or ANY of his toys. Ohhh, is he going to be in for a rude awakening in a few months when he starts to get more mobile!

Other than those, he loves seeing familiar faces (mommy, daddy, grandparents), FOOD, his jumper, his PortaPlay, Sophie the Giraffe, ‘real’ electronics (our phones, the remote, etc.), reading books, being sung to, bright colors, making funny noises, chewing on everything.

Being too tired, too hungry, getting his face wiped, or being in the same place for more than about 10-15 minutes (little guy likes an adventure).

I feel like I’m starting to do so much better. Some days can be long – very long – but I feel like my anxieties over certain things (aka, SLEEP) aren’t nearly what they were, which is mostly due to the fact that Alex has been much more predictable.

I keep saying that I need to write these separate blog posts to share all of these thoughts that I have, but finding the time to really sit down and write them all out has been challenging. Which is definitely sort of a bummer, since I love sharing my ‘mommy mind’ with you guys…but working mom life with these two is definitely keeping me busy. And right now, this is where I’m meant to be. 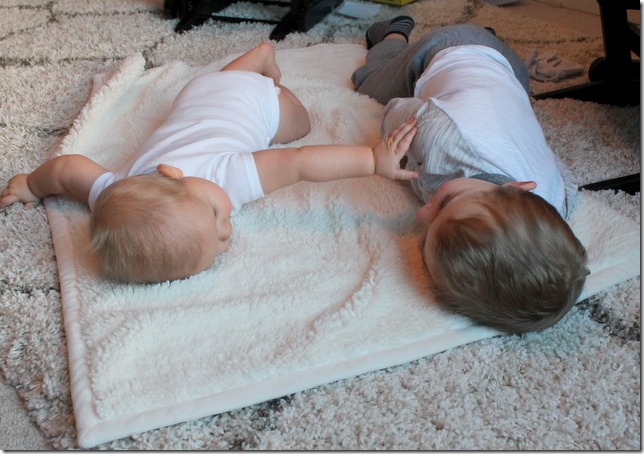 One thing that I have been battling quite a bit more lately is dealing with irrational fears. It started more after I first became a mom, but lately, I feel many of them starting to resurface and I’m finding myself becoming incredibly overwhelmed and worried about certain, random scenarios (for example, I’m driving with the kids over a bridge and the car falls in the water…what do I do if there are two kids in the car??). I know, it’s totally crazy and I get angry when I keep playing these over and over in my mind because it’s just a waste of time and energy and leaves me a ball of nerves. I can’t be the only one, right?

Other than that, I really do need to start taking more time to really take care of myself. And by ‘take care of myself,’ I mean take the time to actually put together healthy meals when I’m home (rather than snacking on junk, not making legit meals) and try to figure out a good time to get my workouts in. Right now, I just cannot wake up in the mornings (even on the days Alex does sleep all night!) to get my workouts in, so it’s become a bit of a challenge since I definitely have no desire to do it once the kids are finally in bed for the evening. So those are two of my goals for the coming months ahead.

I promise, I WILL get more of those blog posts up about mommyhood, though. So stay tuned!

Ohh, little Alex. You just make me smile, and you are so incredibly loved!! <3