Oh my gosh, things are getting so FUN with this guy.

We’re really starting to approach one of my favorite stages with Alex; he’s absolutely still a baby BUT, he’s starting to become just a little more interactive. He has preferences, he can interact a bit, and he just cracks me up sometimes!

JUST FOR FUN: HERE’S A LOOK AT LUCAS AT 8 MONTHS! 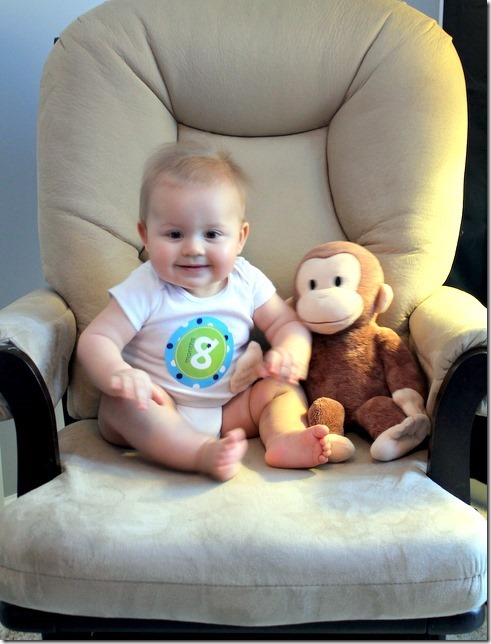 Our little chunk-a-monk is (unofficially) weighing in at about 23lbs (although I really do need to check that again) and I’m not totally sure on his height. Whoops. Either way, he’s a big boy, no doubt about it. 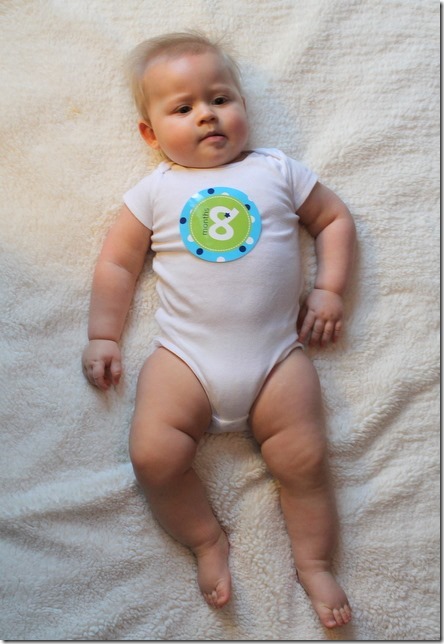 Alex still loves food. Nothing has changed there!

When it comes to nursing, Alex is definitely more interested in what’s going on around him than he is in nursing. For that reason, I try to nurse him in his room with no distractions when I can, but even still, he’s done pretty quick.

We still do 3 meals a day, and he will either nurse or get bottles 4 or 5 times a day with a schedule that is very similar to this:

For solids, we’ve been doing a mixed of purchased and homemade purees, and just within the last week or so, we’ve been trying out some more finger foods. I love finger foods because they give me a little more freedom to be able to eat my own dinner (if we’re all actually eating together!) but I also loathe them for the huge mess they make. ;) 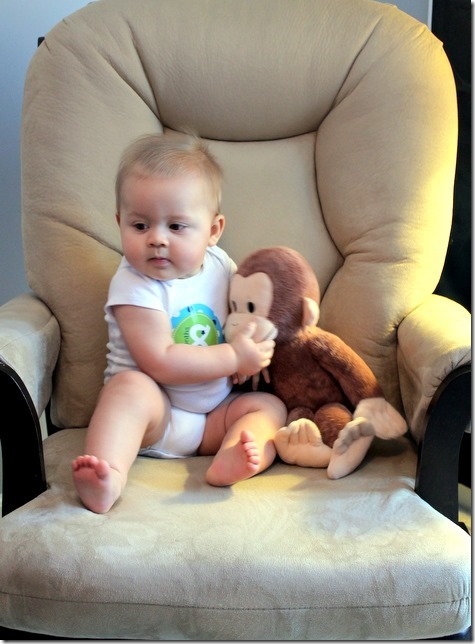 For finger foods, we’ve tried the following so far, cut up into small, bite-sized pieces:

So far, he loves it all, and I’m excited to introduce some more options this month!

Not too much has changed in this department. Most days, Alex will nap around 9am and 1pm. Those naps can last anywhere between 30 minutes and 2 hours, depending on the day.

On days he wakes up from his second nap a little earlier, he’ll still take that third cat nap while nursing after work/daycare. If he wakes up a little later (after 3pm), then I’ve been skipping it and he’s been fine, so I wouldn’t be surprised if he winds up dropping it all together by next month…which makes me a little sad. I love those snuggles. 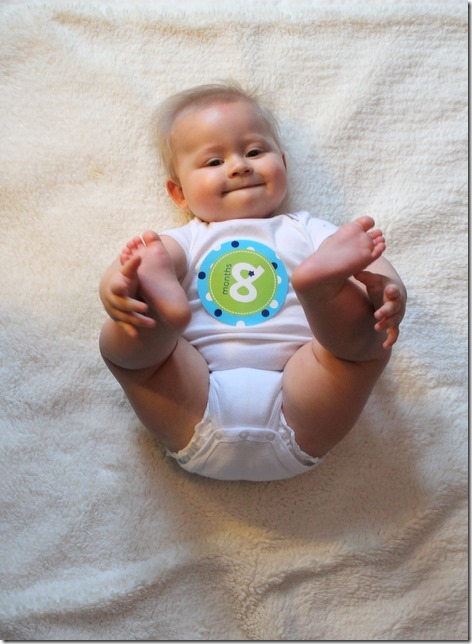 Things are still going well and, again, not too much has changed since last month. He still sleeps in the Baby Merlin Magic Sleepsuit, which he only uses for nighttime sleep. We put him down awake right around 7pm, and he almost always goes to sleep on his own with no crying.

Unless it’s not me putting him down…then it almost always requires a little intervention!

Some nights he sleeps straight through until morning, but most nights he still wakes up just once (which can be anywhere between 1am and 5am). On the nights he does wake, I still nurse him super quick on that wake-up and have him back in his crib within about 15-20 minutes. Although, we have had a couple of nights recently where he’s been up a few times between 11pm-1am and having trouble staying asleep.

I’m considering trying to drop that middle of the night feeding, since I know he really doesn’t need it, but I just haven’t gotten to the point where I’m ready to fight that battle. Then again, maybe it won’t be as bad as I think? Bahaha…

Alex is quickly inching his way out of 9 month clothes and the majority of clothes that fit him best now are 12 months (except for sleepers with feet, he’s at an awkward length where 9 months are starting to get snug but 12 months are huge!). He’s still in size 3 diapers, and wearing size 3 overnight diapers from Pampers, too. 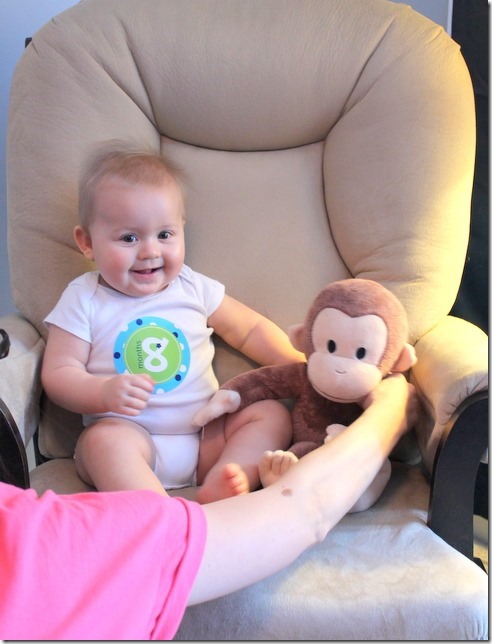 Ohhhh, he is funny! Alex has definitely started showing his preference for certain things, and if he doesn’t want something, he’s quick to push it away. He loves shaking his head ‘no’ but he’s not necessarily doing it as a means of saying no.

He loves to cheese and giggle at the site of Cody and his big brother, which I believe are his two favorite things on this Earth right now. 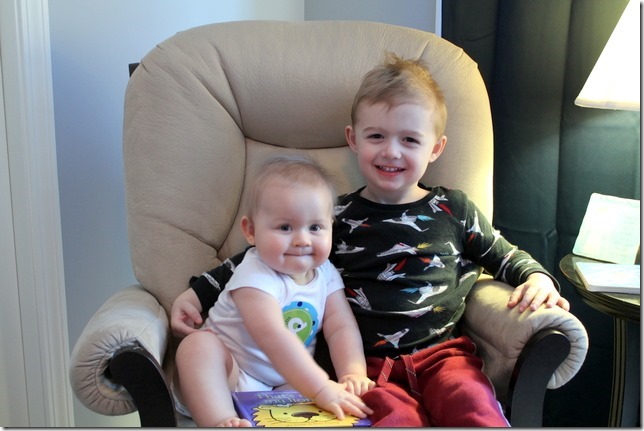 He’s really a very happy baby, which just makes MY heart happy. He loves seeing those that he sees regularly (us, grandparents, daycare) and is always full of smiles, but he does get a little timid around strangers.

In addition to starting more finger foods, Alex had his first word – MAMA!! And he says it all. day. long. I love it. We get mama, ama, and mom, and then there also some dada’s, baba’s, and random squeal/squawks thrown in the mix, too.

Alex has also started to become mobile! He isn’t crawling, but he scoots like it’s nobody’s business and can easily figure out a way to get from point A to point B; most of the time, we look at him and ask how in the world he ended up getting there. 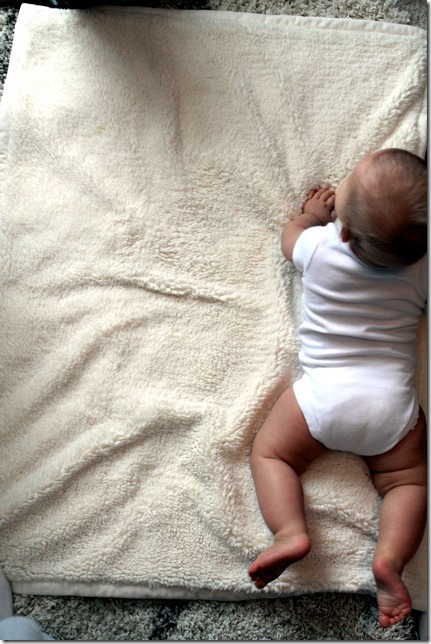 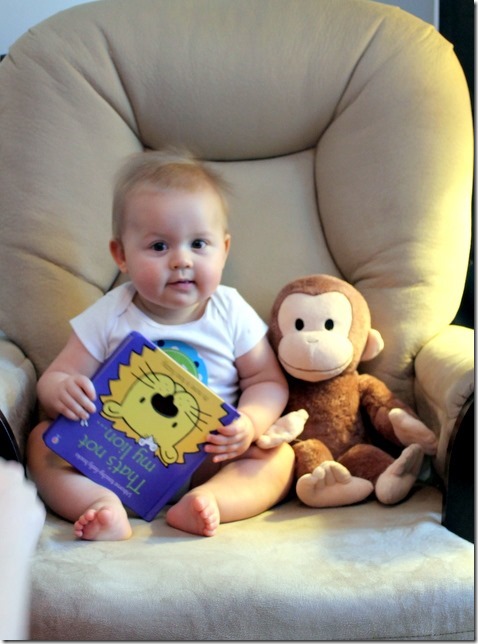 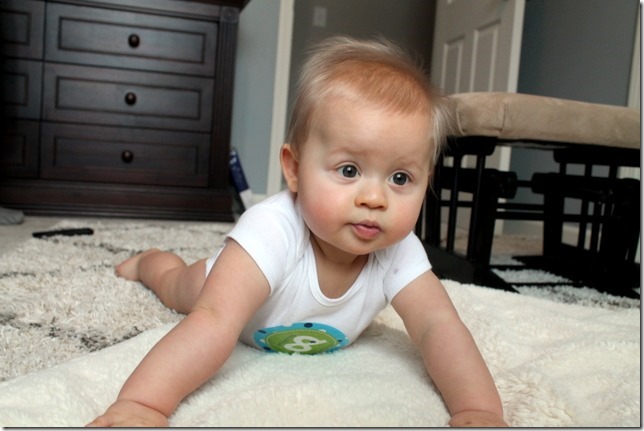 I feel like every month I write these, the better I feel. While most days are still crazy, it’s less of an “oh my god, we’re never going to survive” crazy, as opposed to “ahhh, life with two kids” crazy. Does that even make sense?

I’ve actually found that stepping back a little bit from social media has helped. While I’m certainly still on it (hello, blog), I don’t find myself scrolling (and, inevitably, comparing my life to others) quite as often as I was before. Even though I KNOW that the lives people portray on social media are definitely not the full story, sometimes you can’t help but let your mind go there when you’re in the thick of something yourself and everyone else’s lives just seem so much…easier. I’m sure you guys know what I mean. And that’s why I always try to be real and honest when it comes to this motherhood stuff (or anything, for that matter!).

I know I touched on the subject of irrational fears a bit in last month’s update, but that’s still something that I often deal with. I’ve also found that I have moments of feeling anxious about death or a fear of losing those close to me. It’s never anything to the point where I can’t carry on with my day, but more like moments of feeling sad or slightly overwhelmed.

I know by sharing this that some of you may comment or wonder if I’m aware of the warning signs of PPD and anxiety, and yes, they are all things I’ve kept in the back of my mind. I have not gone to talk to anyone “officially,” but I have talked through things with Jay and some close friends which always tends to help.

Despite what I mentioned above, overall, I really, truly am happy. Like, so much happier than I was five, four, even three months ago. Our little family is really starting to jive and we’re having FUN. While I have days where I feel like I may go crazy (if you’re a mom and don’t fall into that category at some point, then you’re lying), I truly do feel so lucky to have such an amazing, happy, and healthy little family. They are my world, and I’m just so excited to see these two grow together…buuuut, just not too quick. <3 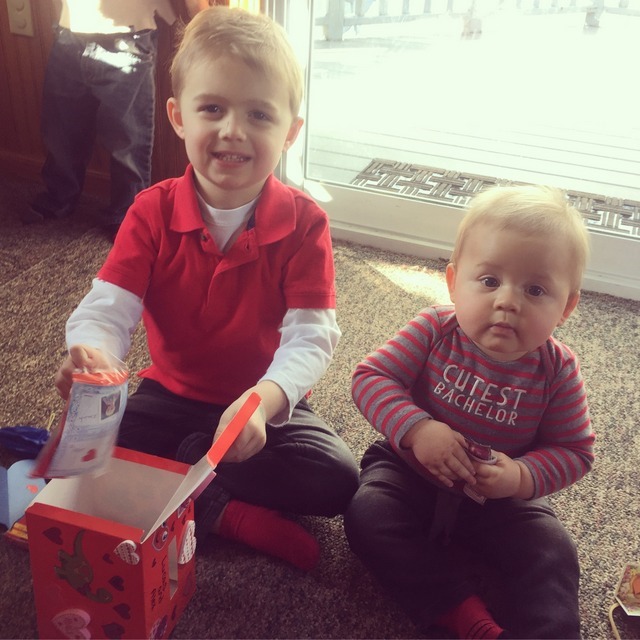 Alex, you are quite the character and I just love watching your little personality grow with each passing day!