This post is brought to you by a STSL sponsor!

Ohhhh, my sweet little Lucas. When he’s surrounded with people and places he’s familiar with, this kid is quite the character. He’s outgoing, he’s so darn funny, he’s smart, and he knows what he wants. He’s 3-1/2 and there’s no denying that, but it’s so fun. 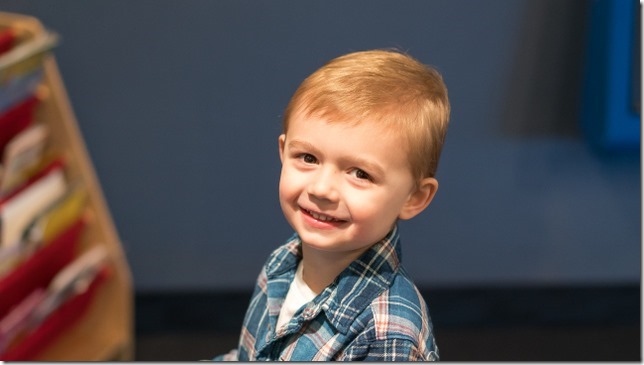 But put him in a situation where he’s around people he doesn’t know or if he’s in an unfamiliar place, and he becomes a completely different kid. Shy, timid, hiding behind mommy…and if he’s tired enough, meltdowns are not out of the norm.

I have no doubt that this is normal for many toddlers, but for these reasons, I was very anxious about bringing him for his first trip to the dentist. It was something we meant to do back over the summer, shortly after he turned three, but then life with a newborn happened, then potty training, then a new school, and…you get the idea. Life got busy!

I’d heard a number of great things from friends and acquaintances of mine about a local pediatric dentist, Where Smiles Grow (at Capital District Pediatric Dentistry), so we decided to give them a try (for the locals, we visited the Latham office!).

Our whole ride there (and the days leading up to our appointment) I tried my best to hype up the visit. I explained that he’d get to wear cool sunglasses and maybe even get a prize if he did well. He’d always get excited about those, but when we talked about the dentist looking at his teeth, he was NOT excited and kept telling me we didn’t have to go.

Greeeeattttt, I thought. This is going to go smooth.

As soon as we walked in, he acted exactly as I’d expected; shy, hiding behind me, asking to go home. Poor kid. But then the sweetest receptionist reached out and caught his attention, pointing out their big game room they have. Well, she certainly knows the key to my kid’s heart! 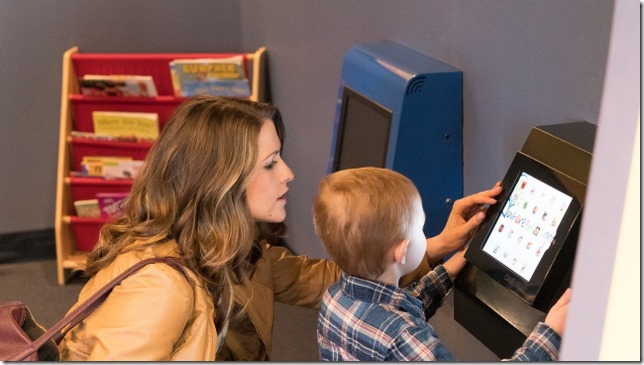 We had a few minutes to play in the game room before the hygienist came out to greet us and bring us back into the room. Again, talk about some amazing staff. And I swear, with 110% certainty, I am NOT just telling you that because this is technically a sponsored post. Even if it was not, I would be singing their praises. They. Were. Incredible. 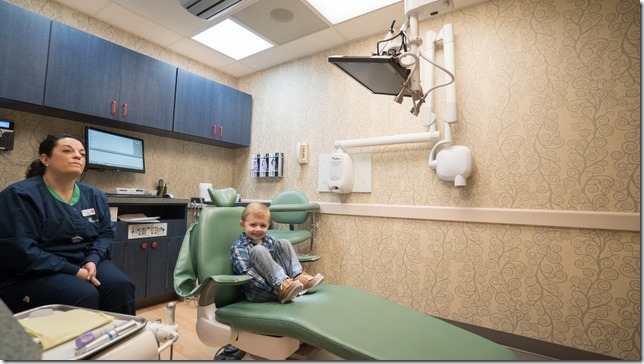 Much to my surprise, Lucas willingly hopped right up into the chair, where they had Finding Dory playing on the TV above him. He was in his glory! 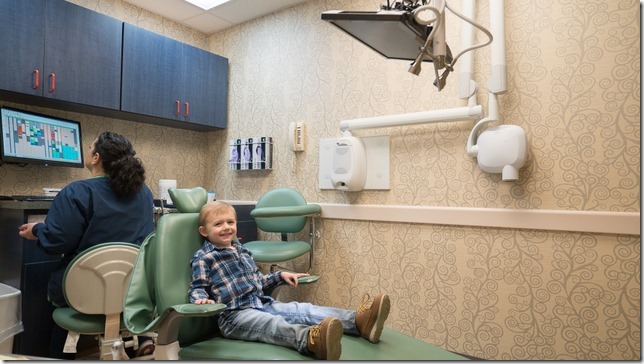 The hygienist and I spoke a bit while she asked some questions about his medical background, oral health, etc, while Lucas continued to be a ham for the camera. I, still, was amazed at how cool and collected he was. Then again, nobody had gotten close to him yet! 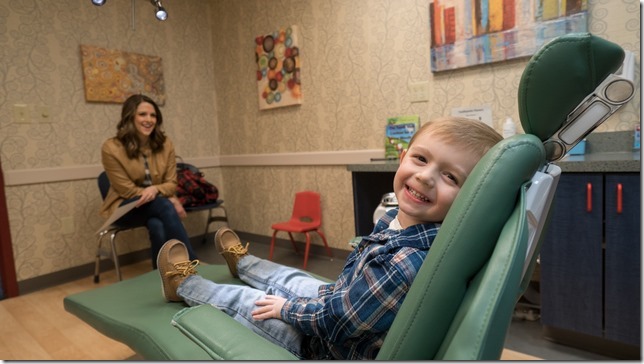 Once we were done with the health history, Christy started chatting with Lucas and getting him excited about his teeth cleaning. He got to pick out a pair of sunglasses, they counted teeth, and then he got to pick out what kind of toothpaste he wanted (cookie dough…he IS his mama’s boy!). 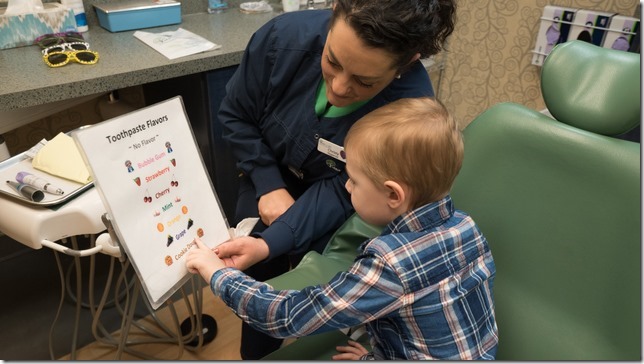 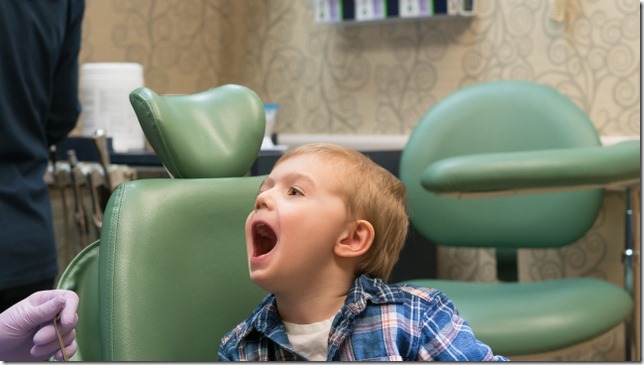 The only thing that Lucas wasn’t a huge fan of was the suction. He still let the hygienist do her thing (again, I was floored), but he made a few faces signaling he wasn’t really diggin’ it. 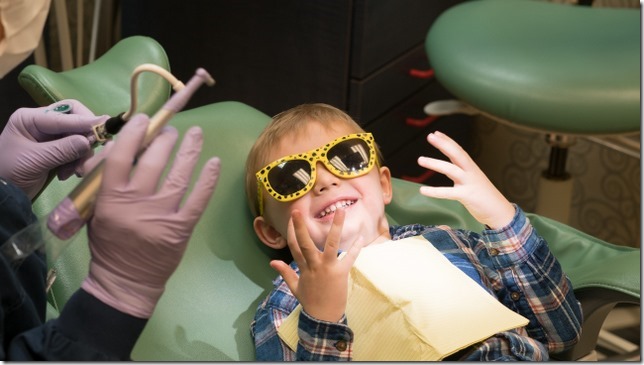 Since he didn’t really like the suction and water, the hygienist decided it would probably be best to skip the fluoride treatment, since he’d need those in his mouth for longer. She said that was totally normal and that he had done great, so I was fine with that.

Once he was done with his cleaning, we got to hang out for a few minutes before the dentist, Dr. Jen, came in. There are five dentists at the practice, but I’d already heard great things about her prior to going, so I was excited. 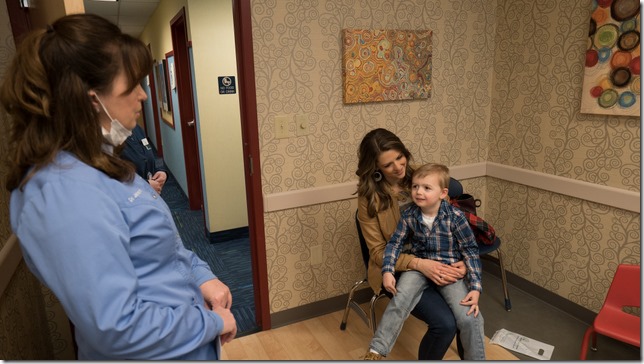 At this point, I think he thought he was done, so he was a little taken aback by having to get back in the chair. 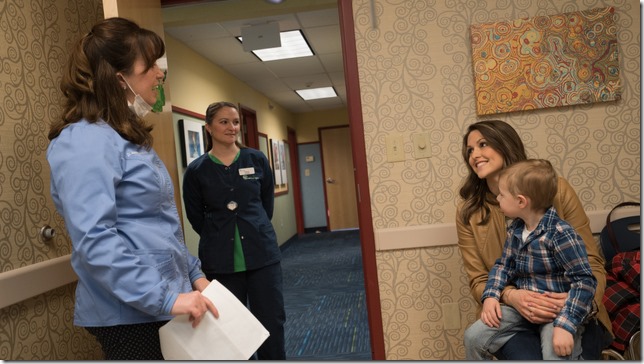 But Dr. Jen was absolutely AWESOME with him, and the two of them got along just great. 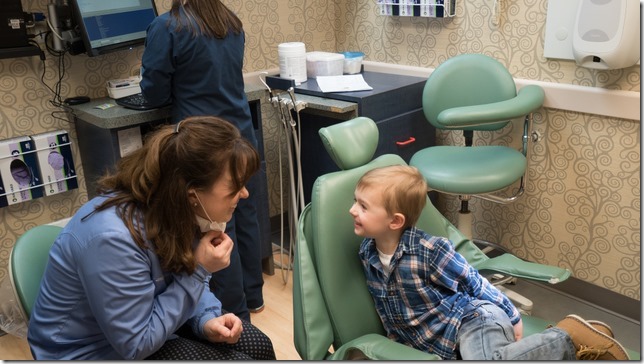 He let her count his teeth again and check for “sugar bugs.” 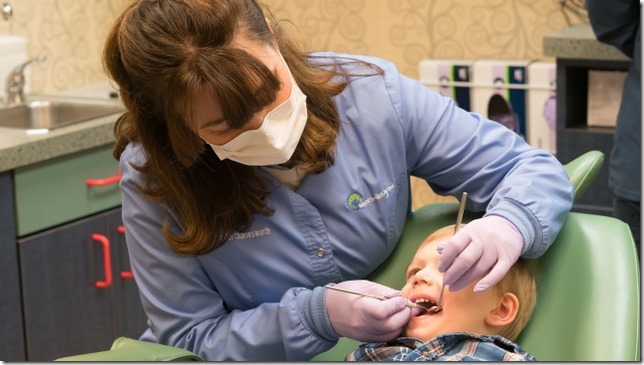 And I was thrilled to find out that there were no “sugar bugs” hiding out in those little teeth of his. Whew! 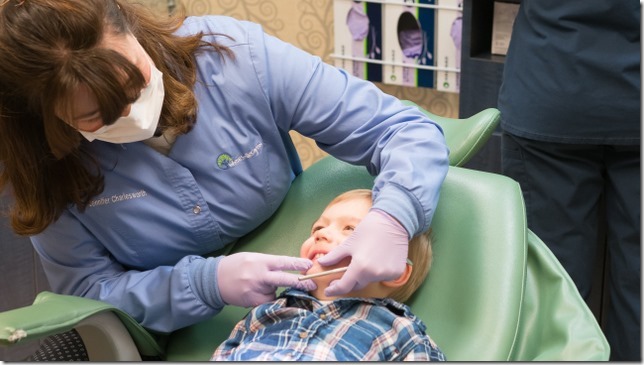 Dr. Jen chatted with me quickly afterward, just saying that everything looked great and that we had been doing a great job with him at home. It was really, so nice to hear that as a mom (who, at least half of the time, has to fight with him to actually brush his teeth twice a day!). 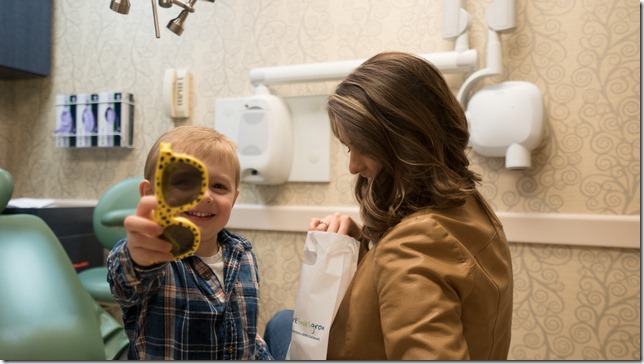 Once he was all done, he got a “goody bag” complete with a new toothbrush, some floss, stickers, coins for the “prize” machines, as well as a raffle ticket to put in their gift card raffle drawing. 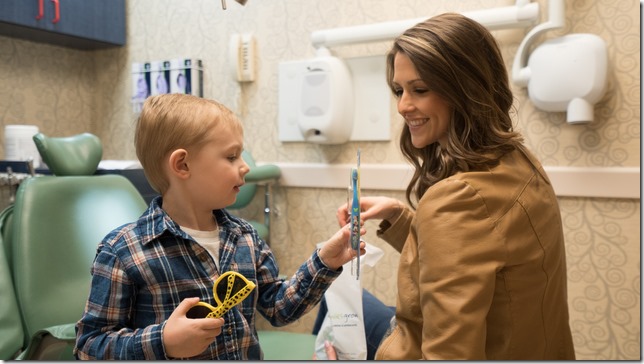 We put our ticket in the Target pail, of course. 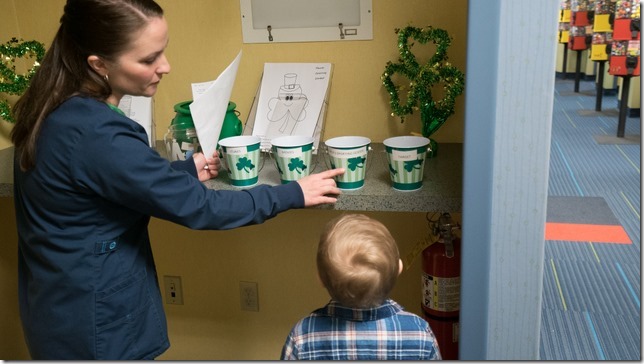 Because he did “so well,” Dr. Jen even gave him an extra coin so he could get two prizes out of the machines. Talk about a happy kid! 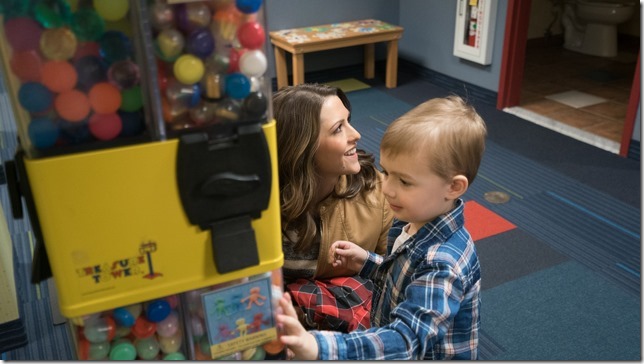 Once he had has prizes, I sat down and quickly checked out with the office staff while Lucas played with his new mini toys. 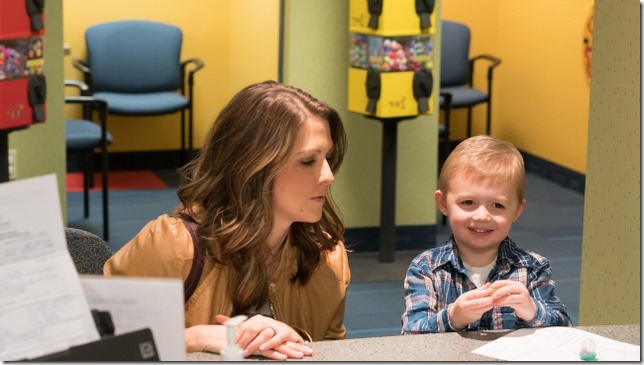 I’m still just SO thrilled with how the entire appointment went at Where Smiles Grow, from start to finish. It was so easy, and they really go out of their way to make the kids feel comfortable. 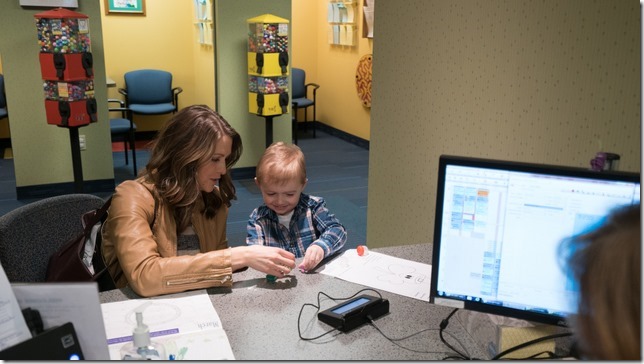 So for any of you who are local, I would ABSOLUTELY recommend checking out Where Smiles Grow (at Capital District Pediatric Dentistry)! They have offices in Latham and Delmar, and they have services for all ages; they even offer free complementary visits for kids up to 18 months!

Now, for any of you who are local or not, I have a great giveaway to offer today, courtesy of Where Smiles Grow!

They’re generously offering a FREE Philips Sonicare Electric Toothbrush to a lucky STSL reader (your choice of the children’s toothbrush, or an adult version!). 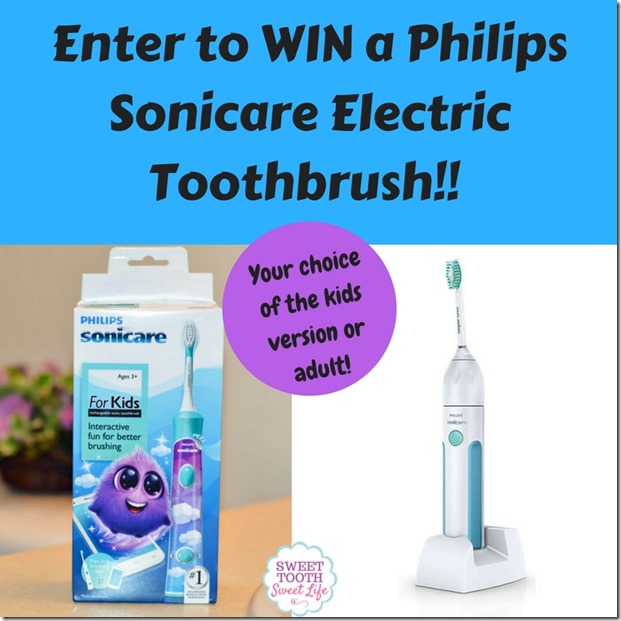 To Enter: Simply leave a comment on this post either telling which toothbrush you’d want to win OR a favorite story about a visit to the dentist!

Disclaimer: This post and giveaway are sponsored by Where Smiles Grow. Plus, a big shout out to Akullian Creative for the awesome photos from our visit and for this post!